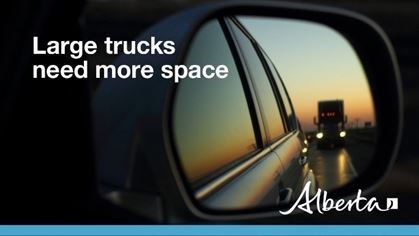 Our traffic safety focus for the month of June is Commercial Vehicle Safety.

Commercial vehicles play an important role in moving goods around the province and across its borders. These vehicles are larger and heavier than passenger vehicles, so other drivers and road users should exercise caution and patience when sharing the road with them. Commercial vehicles have large blind spots, take longer to stop than smaller vehicles, and require a wide turning radius. Make sure to give them plenty of room on the road.

For more information or tools visit: