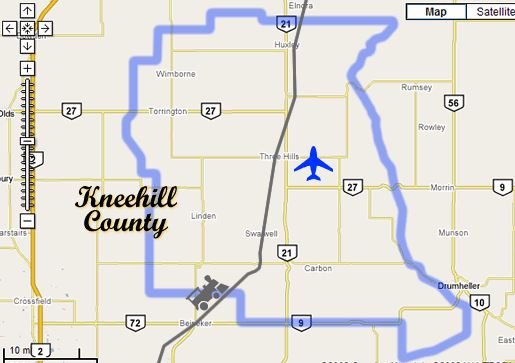 Situated in the heart of central Alberta, Kneehill County is a progressive rural municipality comprised of approximately 814,653 acres of land and a population of 5001. Within the Kneehill County boundaries, are the Towns of Three Hills and Trochu, Village of Acme, Carbon, and Linden, and 4 Hamlets (Torrington, Huxley, Swalwell, Wimborne) and other neighbourhoods (Hesketh, Sunnyslope) with a total population of 11,193.

We welcome new residents to download the following publication, A Guide to Living in Kneehill County (8MB)

Today, agriculture remains the backbone of the local economy, complemented by a strong oil and gas industry. Wind power is now a fixture in the Kneehill County hills and skies. We are also part of the Canadian Badlands tourism group. Kneehill County borders the Tyrrell Museum in Drumheller and Rosebud Theatre in Wheatland County, which both play a large part in the tourism of the region. Camping is very popular in our area, which Kneehill County has four overnight campgrounds under its umbrella (Keivers, Braconnier Dam, Swalwell, and Torrington). Municipal campgrounds in Acme, Carbon, Linden and Three Hills are all very busy.

The Foundation of Kneehill County

The Municipal District of Kneehill #48 first became a reality on January 1, 1944, when the provincial government ordered the dissolution of four smaller municipal districts combining them into one larger unit.

The four areas were:

The formation of the large unit was strongly opposed by the government was not deterred. It meant that the 6 Councillors from each of the four areas were out and 7 Councillors would be elected to govern the new area and take full control of its operation. For two months it was managed by a government-appointed administrator, with help from the Secretary-Treasurers of each of the former separate areas.

The new Council first met in March 1944. Major decisions included deciding that the office would be in Three Hills in the former Stauffer office one block north of the present Post Office. Allan J. Purvis would be the Secretary-Treasurer with Chas. J. Christie and Gordon C. King as assistants. Hugh Parry became the first Reeve.

In 1955, there were some boundary changes and those of the M.D. and Three Hills School Divisions were made coterminous.

1994 was the fiftieth anniversary of the M.D. of Kneehill and to commemorate this occasion, over 700 Township and Range Road signs were erected on all County roads.

At the end of December 1997, the Lieutenant Governor in Council dissolved the Village of Torrington and directed that the area become part of the Municipal District of Kneehill No. 48. Effective February 4, 1998, the municipality officially changed its name to Kneehill County.

Much of the land was first opened for settlement in the early 1900s and many are now celebrating 100 years on the family farm. This achievement is being honoured by the Province and Kneehill County with the presentation of engraved bronze plaques.

To commemorate the County’s sixtieth anniversary in 2004, newly designed County Signs were installed on the major entrances into the municipality. For the 75th Anniversary in 2019, these road signs were replaced.

In its present form, Kneehill County has a population of 5001 and is comprised of approximately 820,143 acres of land and 2,975 kilometers of roads.

History Books of our Area: